Over the past 9 years, watching the increasing underfunding of women’s health,   I’ve prayed a single prayer.  Please god, can we put someone in charge of the health care system who possesses functioning ovaries?    Because if there’s one thing that women’s health needs it’s a woman with health.  A woman with illness might be even better, but at the very least send me a lady-boss with a functioning set of ovaries.  Because regardless of whether she intends to use those ovaries to kick start a kiddo, the very possession of capability requires some sort of management plan.  The thing is, unless you have functioning ovaries, the plight of women’s health could easily fall off your radar.  But functioning ovaries require at least a teenie bit of attention to one’s own reproductive health, and it’s got to be a shorter leap from there to consider others’.

But wait, you say.   Those with testicles can be allies.    They certainly can, and sometimes do, pay lip service to the care that’s inflicted on their daughters, granddaughters, wives or sisters.     But the problem with allies is always the same:  it’s awfully hard to fix a problem that you yourself are implicated in creating.   It requires the kind of intestinal fortitude and introspection the patriarchy just doesn’t have.

At the end of the day, our ovary-less allies won’t give up their power if it means things have to get uncomfortable for them personally.  This is why tampons are taxed as luxury items, and Viagra is over the counter in New Zealand but RU486 is not.   It is why men don’t have to plead insanity to two separate doctors when their ejaculations produce unwanted conceptions, instead women do that heavy lifting.   It’s enough to make one positively hysterical.

It’s worth considering what would happen if it didn’t have to be like this, and at times like this I reach for Ursula Le Guin’s brilliant book The Left Hand of Darkness.  Le Guin builds a fantasy world on the planet Gethen,  in which the inhabitants are asexual androgynous androids, who have interesting reproductive biology.  When they fall in love, one pair of the couple “becomes” female and the other “becomes” male.   In between such times, they normally remain in a completely androgynous state.   Across their reproductive lifespan, they have the opportunity, but not the choice, to be female or male.  This single fact has intriguing implications.  Consider what might happen if every member of our own society, might, at any given time, be “stricken” pregnant.   Maternity units would be converted into palaces overnight.   Parental leave would be adequate, likely even generous, certainly not fought for tooth and nail.   And no particular class of individuals would ever be singled out and subjected to the human rights abusing question in a job interview:  Are you planning on having kids?

In medicine, there is a saying.  You don’t have to have cancer to be a good oncologist.  But lord knows it would help.  And you don’t need to have an occupied uterus to be a good advocate for the maternity system.   But it certainly couldn’t hurt.  And right now, New Zealand’s maternity system is in tatters.   Sure, there’s lots of midwives and doctors who are trying to catch women falling through the holes. They are trying to put up a brave front when backstage is in chaos.  But at a point the public needs to know it’s a front. They need to know what sort of risks hospital CEOs and district health boards are willing to take on their behalf.   You wouldn’t let your cat have kittens in it, if you really knew and really cared what was going on in some maternity units.

When Jacinda Ardern was asked about her future reproductive plans, she rightfully scolded the asker.  Jacinda Ardern has no time for that shit.  Whether she has a child or not is none of your business.   It’s none of mine either, and I’m an obstetrician.   The ethics of psychiatrists  have been rightfully questioned for their diagnosing of Trump over the internet, the same could be true of obstetricians like me who cast aspersions on someone’s ovarian reserves.  We don’t know without personal access to the results of hormonal testing of the secret heartbreak of someone’s premature ovarian failure.   We can’t know if people who present as premenopausal females possess –or care to action— the functioning plumbing bits to match.

But when Christina Campbell, a midwife here in Hamilton asked Jacinda Ardern at a campaign rally what she might do to help the plight of maternity systems, here’s what Jacinda  did say.   She told the audience she was only too aware of the problems.   Some of her best friends she said, are currently experiencing the broken system first hand.   This is the kind of ally we need.  An ally for whom the politics of maternity care is much more up close and personal.  Who can blame us if we hope for something more?   So far,  no one who has needed our services has ever been responsible for making them functional. 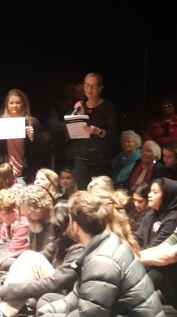